We’re incredibly proud of being a family owned and operated business with three generations actively involved, especially in the a world where those companies seem to be dwindling away and losing passion to create good old fashioned products for customers.

We’re also incredibly proud of our extended family; our extraordinary team. Whether it’s packing product, emptying the trash or managing the business, we value each and every person and the work performed is critical to the production of our quality products being made.

Because Hill Meat Company is a family operation, the story really begins with our patriarch…
It was the summer of 1968 in Wenatchee, WA and the cherry harvest was late. Jim Cheney was freshly graduated from high school and anxious to start his job in the fruit sheds. His father told him that he’d heard that Wenatchee Pack was hiring so Jim headed right down there, to what he thought was yet another fruit packing shed in the apple orchard capital of the world.

He got a bit of a surprise as he drove into the parking lot and saw stockyards and livestock surrounding him. Jim ran into the owner who said “I need a guy on the kill floor, can you do that?” Jim responded that he’d never seen it done before so they went into to check it out.

“Yeah, I can do that”, Jim said. The owner smiled at him and said “You won’t last three days.”

Thirteen years later Jim had mastered every job in the facility, was managing the business and cashed out his retirement plan, put a second mortgage on his home and bought into his first business.

For years he continued mastering the art of developing and crafting quality meat products, primarily bacon, ham and sausages.

He seized an ownership opportunity at Hill Meat Company in 1992. He analyzed the strengths of the facility and the regional marketplace and decided that Hill Meat Company needed to focus on pork products. And focus, he did! Perfecting and producing delicious, old fashioned ham, bacon and sausages the way he’d learned from the good ol’ boys who taught him the trade.

Jim raised his three daughters, Kimberly (Sorensen), Cary (Frostad) and Nicole (Sorensen), in the meat business right alongside him. There are a dozen family member actively working in the business including Jim’s daughters, son-in-laws, and grandchildren.

Hill Meat Company is located in the rolling hills of Pendleton, Oregon, where the Gorge meets the Blue Mountains. For over 60 years as a pork processor, Hill Meat has produced smoked meats with pride. You can find our products in grocery stores and restaurants from Anchorage to San Diego, Salt Lake City to Seattle, Japan, and Korea.

Since 1947, Hill’s has been providing their customers with the finest quality pork products. As a family owned and operated company, our commitment to providing delicious, filler free products is so important to us because we want our customers to have nothing but the best when it comes to their food. From our family to yours, enjoy Hill’s Premium Meats.

Hill’s Meat was recently covered by Meat + Poultry Magazine! Check out the full article on their website and the article “Accidental Butcher”! 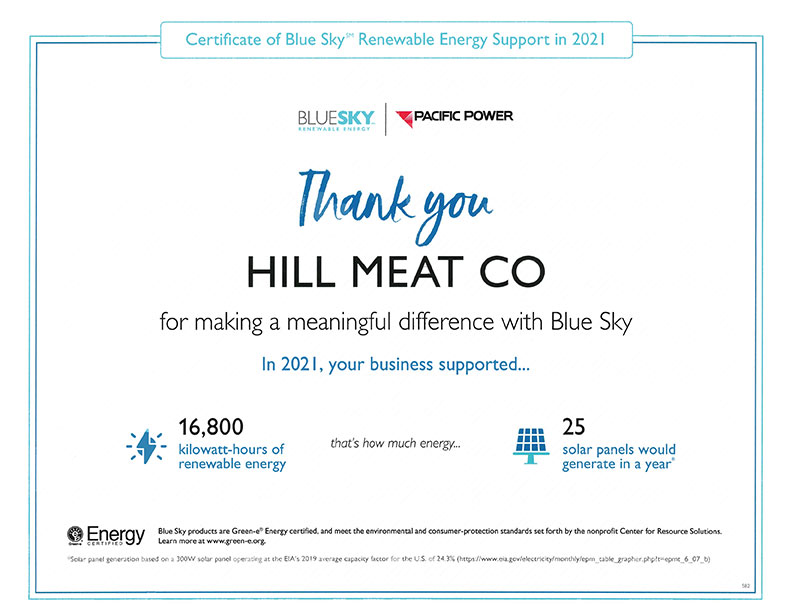